A neglected aspect of the acoustics of Classical pianos


If you think about the parts of a fortepiano which give the instrument its distinct sound, you probably think of things like the strings (thickness, material, and length), the soundboard (wood type, thickness and ribbing, bridge), and the action (hammer size and covering). Those with technical knowledge of modern pianos might also add more subtle aspects to the list, such as downbearing of the strings on the bridge and the points where the hammers strike the strings. One critical aspect of fortepiano sound, however, is almost always ignored: 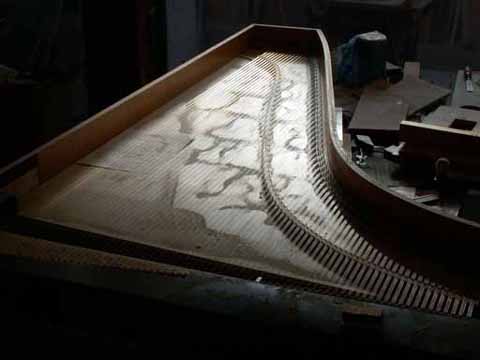 The areas of motion and rest of the soundboard at specific frequencies are clearly shown by "Chladni Patterns", in this case, sawdust on the soundboard. Such patterns make plate modes of musical instruments visible, but these modes do not tell the whole story of what gives an instrument its sound.


All mostly-closed spaces - from your bathroom shower to a shoe box - will have resonant frequencies. In the 19th century, the famous German acousticians Helmholtz used small glass and metal globes of different sizes to study sound. Because each globe had its own strongly-pronounced resonance, by listening through two tiny holes in the globes, he could roughly determine the spectral content of a sound; if the sound contained frequencies at or near the resonance of the glass globe, he would hear them greatly exaggerated. Such a device is called a Helmholtz Resonator, and likewise, air resonance modes in musical instruments are sometimes called Helmholtz Modes. 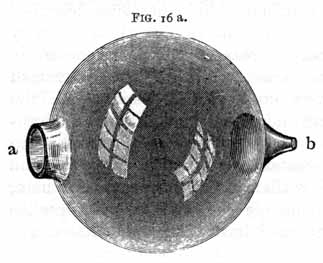 A glass Helmholtz Resonator, as illustrated in Ellis' 1885 English version of Helmholtz's "On the Sensation of Tone" (4th German edition, 1877). Helmholtz inserted the small hole (b) into his ear and listened to sounds entering through the large hole (a). The globe accentuated its resonant frequency only if it was present in the overall sound, allowing Helmholtz to determine the component parts of complex sounds.


Unlike the passive resonators of Helmholtz, which only filtered the sounds coming to his ear, the air resonances of closed-box musical instruments play a much more active role in shaping the sound. Air modes can have a pronounced affect upon how acoustic energy flows through the entire system, causing subtle changes in the volume and sustain of the vibrations induced in the soundboard by the strings, and ultimately, the timbre radiated to our ears. The acoustics of some closed-box musical instruments, such as guitars, lutes, violins, and cellos, have been extensively studied. From these studies we learn that the air resonances do indeed contribute significantly to the overall sound of the instrument. One might think that an enclosed air space would have only one resonant frequency, like a simple Helmholtz resonator, but in reality, the air inside a real musical instrument has many modes of resonance, all occurring simultaneously, all filtering and shaping the final sound we hear. The more the space is divided up into smaller sub-spaces, the more resonant frequencies there are, all interacting with one another to create a complicated and unique mixture. 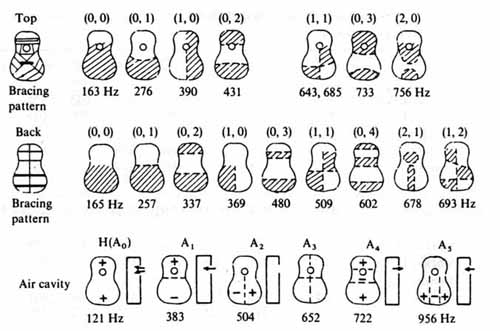 The major resonances of a Martin guitar, as studied by Rossing et. all (see Fletcher/Rossing, The Physics of Musical Instruments). The top two rows show front and back plate resonances, the lower row the air resonances. Note how many different resonant frequencies a space as simple as the inside of a guitar can have.


A modern piano has no bottom, encloses no space, and therefore has no air resonance modes. This fact has mislead acousticians, organologists, and builders to overlook the existence of air modes when studying historical strung keyboard instruments, which by contrast, usually have closed bottoms. This means that most Viennese and South German pianos of the Classical period are acoustically much closer to guitars, cellos, or harps than to their modern equivalents. 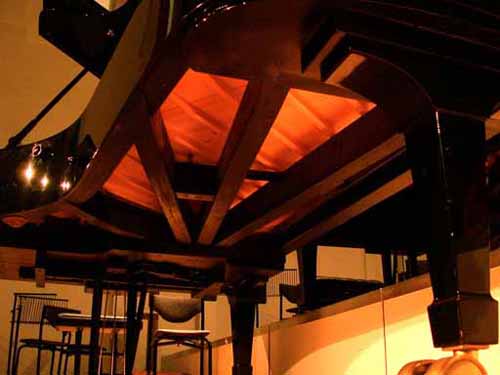 The underside of a Steinway Model D grand. The absence of a bottom combined with frame members which are very shallow separated by large spaces make a framework which is almost completely acoustically transparent. 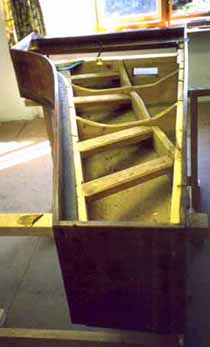 The two framework types used by Walter for most of his 5 octave instruments. Above, the "middle period" design, typifying the 1790's: a laminated "floating liner" standing on columns and supported by cross frames and "flying buttresses". On the right, his later A-frame design (c.1800 onward): a solid full height beam runs down the bentside to the bellyrail, with a series of crisscross lower frames and angled buttresses. Both types divide the interior of the instrument into a myriad of spaces, creating a complex mix of air resonances. 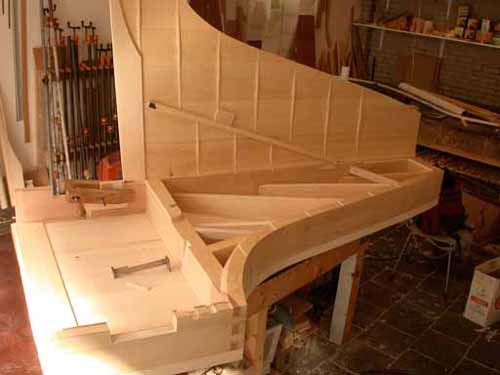 The interior of an 1813 6 octave Fritz model is divided into 6 different pockets, each of a different size and shape, each having its unique series of air resonances. The photo shows a copy under construction in my shop. Both the framework and soundboard are accurately copied from the original.


When we consider the importance of air resonances caused by the different "pockets" within the framework of a closed-bottom piano, it becomes obvious that the only way to faithfully reproduce the sound of a specific original instrument is to begin by faithfully copying the internal structure. Not all makers follow this precept, though; some view the framework of a fortepiano as though it were a modern piano, assuming that its only function is to support the soundboard and resist the tension of the strings. These makers often substitute new framework designs in place of the originals, either their own inventions or "quasi-historic" blends borrowed from (or "inspired by") one or another original maker.

So - if your aim is to have an accurate reproduction of the sound of an antique instrument, be sure to ask your builder about his or her framework designs. Not only is this characteristic just as significant as the others mentioned above, but even more importantly, it is the only aspect of the instrument which is impossible to change after it is constructed. As new organological evidence comes to light, or as your personal preferences grow and develop over time, actions can be rebuilt, hammers releathered, strings replaced, even soundboards rebuilt - all at costs which are not prohibitive. The basic structure of the instrument, however, cannot be changed, and if your instrument is not built following historical models now, it will never be so in the future.