Unlike the modern piano, the fortepiano has no iron frame. The tension of the strings, which can be as high as 6,000 kg in some instruments, is resisted by a wooden structure alone. It has always been a challenge to make a structure which can resist such force, and each maker more or less found his own solution to the problem. In general, however, there are three types of interior framework found in south-German and Viennese pianos:

Having built and/or restored instruments with all three types, I have acquired an understanding of the advantages and disadvantages of each type in structural, practical, and acoustical terms.

NOTE: I offer this information here as a means of understanding the historical development of the instrument. I do not believe that any "advantage", real or perceived, should ever be used as a justification for the substitution of any one frame type in a modern "copy" of an instrument which originally had another type of internal construction. Changing the structure of any instrument will inescapably alter its unique voice!

This is the earliest type of piano framework, found in the oldest surviving pianos of Stein and Dulcken as well as in later pianos of Walter's middle period. It is essentially a variation of the traditional Italian harpsichord framework.

An Italian harpsichord is built around an internal skeleton consisting of the "liner" and a series of braces and supports. The skeleton is constructed on the bottom, and then the thin walls (about 5 mm thick are attached to it. Neither the walls nor the skeleton alone could support the tension of the strings, but in combination they make a very strong and very light structure. 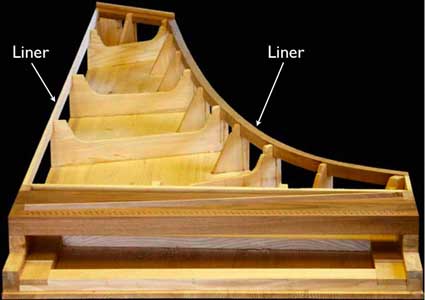 A typical Italian harpsichord framework before the walls are attached. Note the open spaces between the liner and the bottom. This picture shows a hypothetical "Mozart" harpsichord under construction by Grant O'Brien and is borrowed from his interesting website..


An Elevated Liner piano framework is very similar, except that the dimensions of all of the parts have been greatly increased to resist the much higher tension level. The liner has grown from a thin batten to a massive curved beam, but it is still elevated with many empty spaces between it and the bottom, just as in the Italian harpsichord. 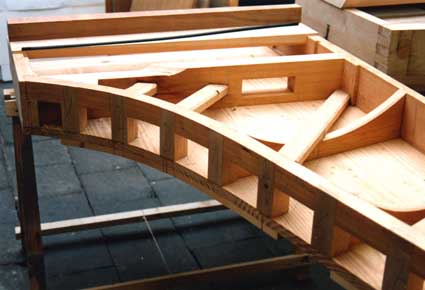 A 5 octave Walter copy under construction in my workshop. The liner and its supports are much thicker, but the idea is essentially the same.

An Elevated Liner system is mostly open inside, and therefore the instrument does not weigh very much. Since the walls are so thin, they also vibrate considerably and radiate sound just like the sides of an acoustic guitar or a cello. One could almost say that the walls are also "soundboards". The sound of the instrument is very open and free, rich in color and depth.

An Elevated Liner framework is very time consuming to make. There are many different parts, and the joints between them are complicated and must be made with great care.

The A-Frame is the most common design found in original fortepianos. Stein, who may have been its inventor, started using it sometime around 1782. Many other south-German makers of the late 18th century also used A-Frames, as did a number of Viennese makers. Walter abandoned the Elevated Liner and began using the A-Frame sometime around 1800. The majority of Viennese makers continued using a simple solid-wood A-Frame until the introduction of the modern cast-iron plate. 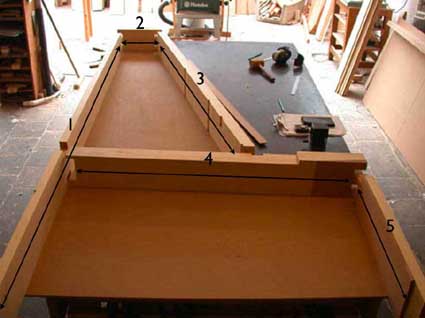 This 6 octave Fritz copy under construction in my workshop shows the five basic parts of a typical A-Frame: (1) the spine; (2) the tail; (3) the "bentside"; (4) the bellyrail; (5) the cheek. The parts are held together by traditional woodworking joinery: tenons, dovetails, or finger joints.


In contrast to the light and efficient Elevated Liner, an A-Frame resists the tension of the strings with massive wooden beams. The name comes from the shape formed by the main parts, similar to the letter A. These pieces are uninterrupted from the bottom up to the soundboard. Unlike the Elevated Liner, which is constructed on the bottom, the A-Frame is constructed as a seperate skeleton and the bottom is attached later. While the five basic pieces are always the same, each builder devised his own variation of internal diagonal and cross braces. These frameworks are so heavy and rigid that the walls of the instrument no longer perform any real structural purpose; they exist merely for aesthetic purposes and to support the lids. 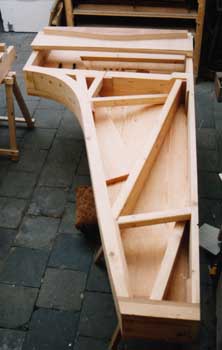 A 6 1/2 octave Fritz copy under construction shows the incredible strength of an A-Frame. With only a few interior braces this framework supports more than 5,000 Kg of string tension!

Compared to an elevated Liner, an A-Frame is both much easier to make and much stronger. This is probably why all Viennese and south-German piano makers adopted it as the instruments grew in both popularity and size.

An A-Frame is less resonant than an Elevated Liner because the entire perimeter of the instrument has a massive internal structure. It is also very heavy.

The Stacked Laminate frame is found in pianos of a few workshops after about 1810. The Viennese maker Jakob Bleyer claimed to have been the first one to use laminated frameworks (the same newspaper article of 1811 quoted in the wire section of this website), but today this type of construction is mostly identified with the pianos of Graf and the later instruments of Streicher.

A stacked laminate framework is basically an A-Frame built up in 5 or 6 thin layers glued one atop another, very much like modern plywood. At every joint between the different parts of the frame, the layers alternately overlap each other, like the corner of a brick building. 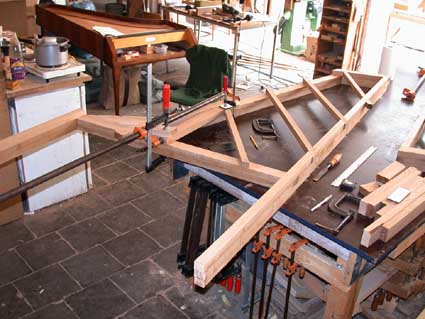 A 6 1/2 octave Graf framework under construction in my workshop (upside down on the workbench). The basic design has the shape of an A-Frame, but each member is made from a laminated stack of thinner pieces. 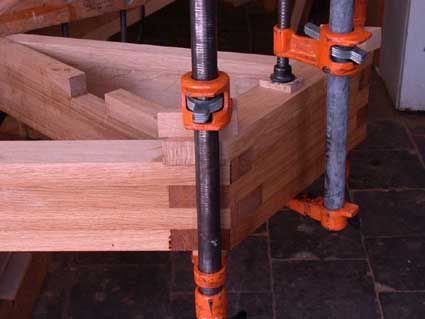 The tail/bentside corner showing the "faux" joinery created by the alternating overlap of the layers.

A Stacked Laminate framework is very rigid because of the interlocking connection where the frame members meet. However, this extra rigidity only became important when builders started making instruments without a solid bottom, which did not become common practice until the mid-1830's.

The main advantage was economic. In the high-production assembly-line workshops of Graf and Streicher, laminated frameworks saved both time and cost of material. The thin pieces of wood were bought already cut to thickness from the sawmill, where water-driven gang saws would slice whole trees like loaves of bread. The reduced thickness allowed the wood to dry much faster, drastically reducing the time, space, and expense of having large amounts of wood drying for several years. Since each basic frame member was assembled from many smaller pieces, a flaw in any one piece could be compensated by the other pieces, meaning that the raw material rejection rate was much lower. Finally, since the joinery was created by merely overlapping the layers, the framework could be made by relatively unskilled woodworkers, meaning they could be paid less.

A Stacked Laminate frame is just as massive and heavy as a solid wood A-Frame, but it is also more rigid, which means that it is less free to vibrate. The Stacked Laminate is the least resonant of all of the historical frameworks types; the soundboard becomes the only real resonating part of the structure, just as in the modern piano. This has a noticeable effect upon the overall sound of the instrument, causing it to be less rich and free than either of the other two systems.

The main disadvantage, however, is reduced longevity; Stacked Laminate frameworks have a tendency to come apart or "delaminate" with the passage of time. As the wood expands and contracts with humidity changes, the glue joints between the layers can begin to break open because the different pieces do not move exactly the same. 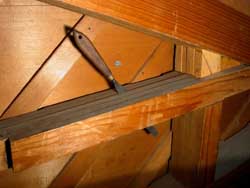 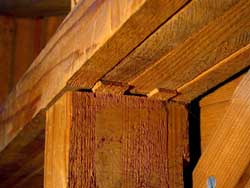 These pictures show an 1838 J. B. Streicher piano before restoration in my workshop. Delamination was causing the framework to fail at a number of places.

Once delamination begins, it often spreads through the framework like a cancer, infecting some layers here, other layers there. The instrument can only be properly repaired by taking it completely apart and building it up all over again, piece by piece - a very expensive undertaking! The risk of delamination is even higher in those modern fortepianos which have been built with PVA glues; a laminated construction with a glue which is not resistant to long term stress is a recipe for disaster!

One would think that when a modern builder makes a "copy" of an original piano, he would use the same internal framework, but the truth is that this is often not the case (bad pun, I know!); a number of builders, including quite famous ones, reject the original builder's design and substitute their own systems. Stacked Laminate frames can be often be seen by taking out the action and looking inside the keywell, but occasionally the laminations are hidden by veneer. Sometimes you can see part of the internal construction by looking through the "mouse hole", the little window inside the keywell behind the action, but the view is usually very limited. If you want to know what kind of framework is inside any modern fortepiano, the best way is to ask the builder.