Conrad Graf is perhaps the most famous of Viennese makers next to Walter, and much like Walter and Mozart, because of his association with a famous composer: Beethoven. While it is true that Beethoven had a Graf piano at his disposal near the very end of his life, the whole episode appears to be nothing more than a marketing ploy of the shrewd businessman Graf is known to have been (he invested heavily in the booming Viennese housing market). He probably took an old quadruple-strung instrument which was lying around the shop (he had given up on the idea of quadruple-stringing years before because the instruments were untunable), cleaned it up, and loaned it to Beethoven, ostensibly to help overcome the composer's hearing trouble. When Beethoven died a year or so later, Graf immediately took the instrument back, had the fellows down in the veneering department inlay Beethoven's name on the damper rail. Graf then sold it as "Beethoven's piano" for a handsome sum to a dentist, effectively making a silk purse from a sow's ear!

Graf's instruments represent an aesthetic which is more proto-Romantic than late-classical Viennese. Everything about their design is tailored to provide a long singing tone, which unfortunately can only be had at the expense of clarity and transparency. If you really love the music of Schumann and early Brahms, a Graf is just the thing for you, but if you are more interested in Beethoven and Schubert, I'd recommend a late Classical instrument like those of Fritz, Brodmann, or Rosenberger. Graf's instruments are significantly heavier than their contemporaries because of the solid oak framework. Despite their reputation, they are actually not any louder than instruments by other makers - perhaps even less so.

I've been involved in the restoration of one Graf and the building of two copies of the instrument - one of them in a left-handed version for Christopher Seed. 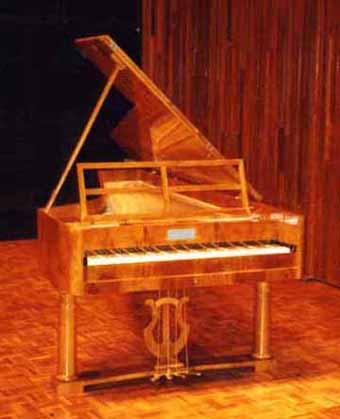 No, this is not a mistake!!

This instrument was actually built "the other way around" for the left handed pianist Christopher Seed. 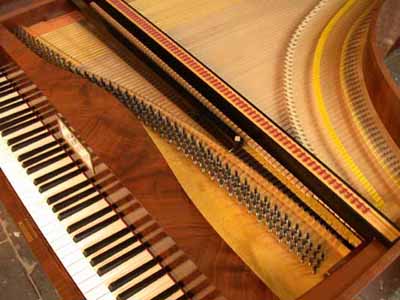 This one (the "right" way around) was built for the Royal Danish Conservatory in Kopenhagen.