The Prellzungenmechanik is an incredibly simple kind of piano action. Because it is so simple, each part takes on an increased importance, and each part must be made with the utmost care and precision. One of the most important pieces is the small fork which holds the hammer on the end of the key, called Kapsel in German (plural: Kapseln). In the earliest pianos of both the south-German and Viennese schools, the Kapseln were made of wood, but sometime in the early 1790's, the Viennese makers began using forks made of brass. These brass Kapseln were probably mass produced by specialized workshops, not made by each builder, since the Kapseln from many different instruments by different makers all look exactly the same. 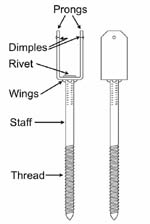 Finding good Kapseln today is a major challenge for a fortepiano maker. There are a number of ready-made forks on the market, all with at least one fatal flaw. After years of frustration with these inferior Kapseln, I decided that I had had enough! In 1997, I started making them myself, closely reproducing all the important functional and material aspects of the originals. My Kapseln can also found in instruments of other makers as well, most notably those of Christopher Clarke. Please contact me if you are interested in ordering a set.

Anatomy of a Kapsel

The fork must hold the hammer axle lightly yet securely; if not, the axle can rattle about slightly in the dimples, causing a noticeable click at the moment when the hammer strikes the string. On the other hand, the fork must not pinch the axle too tightly, or it will cause the hammer to move too slowly, or in extreme cases, prevent it from falling back to its rest position altogether. Too much friction at the axle also makes it difficult if not impossible to control the action at low dynamic levels. The only way to achieve just the right amount of holding power is when the prongs of the fork are like springs. If the prongs are too rigid, it is impossible to set the right degree of "grab" that will provide frictionless silent operation under all playing conditions, from the lightest piano to the most powerful fortissimo.

Furthermore, if the metal is too soft, another problem arises when the hammer is inserted or removed; the fork prongs will permanently bend outward whenever they are spread open, and they will fail to spring back enough to hold the hammer securely and prevent rattling.

Thus it is very important to select both the proper hardness and thickness of the sheet brass used for making the prongs. 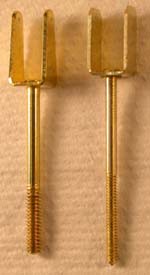 The photos on this page show a popular ready-made Kapsel which can be found in many modern fortepianos (left) compared to a Poletti Kapsel (right). In this photo, it is clear to see how the prongs and staff of the ready-made Kapsel are considerably thicker, causing them to be too stiff.

The small indentations inside the fork are the points of contact between the hammer axle and the fork prongs. This contact should be frictionless, since even the slightest resistance can cause poor repetition, create the sensation of a heavy touch, and make it very difficult to play softly. Even with a perfect Kapsel, two things can cause friction to increase with the passage of time:

Therefore, even with good Kapseln, an occasional cleaning of the dimples and axle tips is an important part of fortepiano maintenance; how often this must be done will depend upon your climate. However, both problems can be reduced by dimples which are very small and shallow, only deep enough to provide purchase for the axle points. Deep dimples provide more space for accumulations of dust and greater areas of contact or near contact between the metals where Galvanic corrosion can occur. Deep dimples are also much harder to clean thoroughly when maintenance becomes necessary. 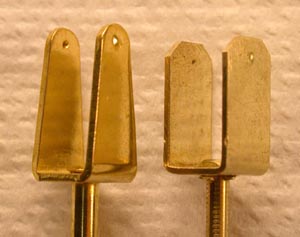 This picture shows the dimples on a ready-made Kapsel (left) compared to those of a Poletti Kapsel (right). The dimples in my Kapseln are very shallow, only large enough to provide purchase for the axle tips.

Finally, the dimples must be punched in their proper positions in order to assure proper hammer rise. They must be centered over the axis of the staff and at the same height above the bottom of the U. Dislocated dimples can be corrected by bending of the staff and/or forks, but this represents unnecessary work and leaves an unsightly result.

The rivet holds the fork to the staff, and must be secure and strong against rocking force in all directions as well as resist any rotation of the U. In original Kapseln, the head of the staff is squared-off, inserted into a square hole punched in the fork, and then hammered flat (riveted). 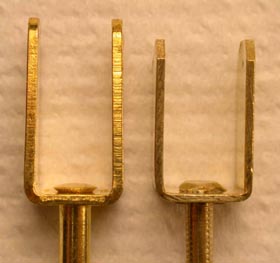 The ready-made Kapsel (left) has a very poorly formed rivet; the head has not been flattened completely. The Poletti Kapsel rivet (right) firmly contacts the inside of the fork.

The four extrusions beneath the "U" of the fork are the byproducts of squaring-off the top of the staff. However, they are much more than mere remnants of a shaping process; they also have the important functions of supporting the fork in four directions (left/right, forward/backward); together with the flattened head of the rivet inside the fork, they clamp the fork firmly. This combination of a square shank in a square hole and the over/under clamping assures that the fork will continue to remain tightly attached to the stalk, neither rotating nor wobbling, even after decades or centuries of use. 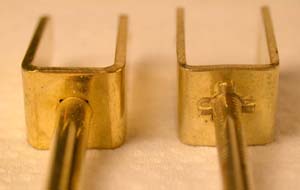 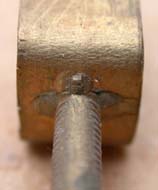 The ready-made Kapsel (left) has no wings at all. This is because the staff top has not been squared, but merely turned round to smaller diameter. The rivet has been formed by inserting a round staff top in a square hole, leaving many gaps between the fork and the staff even after the rivet has been made. The third picture on the right shows a Kapsel from an original Viennese instrument. Notice how the wings are identical to those on the Poletti Kapsel (middle). The marks on the staff are left by the four-jaw chuck which grabs the staff while the rivet is made.

The staff of a Kapsel would appear to be the simplest aspect, yet it has several important characteristics as well. Like the prongs of the fork, it must also be somewhat springy so that it flexes slightly without permanently distorting under the various forces placed upon the hammer during playing. This is especially important with action which has a single solid backcheck rail, as do most instruments of the Viennese tradition. While this rail is more or less immovable in the horizontal plane, the hammer axle is at times closer to it or further from it. This is in fact the very aspect which allows the back check to function at all. However, if the hammer checks against the rail early in the key dip (as can happen under certain playing conditions, further key depression push the hammer head, shank, and Kapsel fork tightly against the backcheck rail. A flexible Kapsel staff allows this to happen with damaging and of the individual parts.

Furthermore, when the Kapseln is first installed in the action, it must be bend in several directions to achieve perfect orientation of hammer rise and the exact location of the hammer beak. A staff which is too thick and or too hard makes bending difficult.

Finally, the composition of the brass from which the staff is made is of the utmost importance. Most brass used today contains a small proportion of lead in order to make it easier to shape using high-speed cutting machinery. Unfortunately, lead makes the brass brittle, meaning that it will break if it is flexed too much or too many times. In a Kapsel, the problem manifests itself in two ways:

The thread of the ready-made Kapsel (left) is very coarse compared to the thread of the Poletti Kapsel (right) which is essentially identical to threads found on original Kapseln.