How to Remove/Install PZM Actions


Removing and reinstalling Viennese and South-German piano actions is tricky. If you don't know what to watch out for or the "tricks of the trade", you can easily break many hammers with one wrong move. Christopher Clarke and I have put together this little guide to show you how to do it safely. In these photos, Chris demonstrates the proper techniques using a c.1820 6 octave Fritz recently restored in his shop.

N.B. These instructions are valid only for 6 and 6 1/2 octave pianos with "una corda" or "action slide" (verschiebung). Other types of instruments, especially 5 octave pianos, have different systems - click here to see how to remove these actions. If the instrument at hand does not seem to be of the type shown here, STOP before you do something wrong! 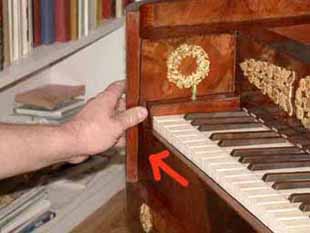 Remove the thin batten which runs across the front of the keywell, just below the keys. Usually this batten has a hidden spring at one end or the other (try pushing at both ends to find out which way it goes). Push the batten against the side of the instrument with your thumb, and it will slide deeper into the wall, allowing the other end to come out of its slot. Then slide the batten back in the opposite direction and remove it completely.
Some battens have no spring, but are themselves sprung into place. If the batten won't slide either left or right, you probably have to grab it at the middle and bend it into a shallow curve until you can get one or the other end out of its slot. Try to keep it pushed toward one end and support the other so that it doesn't suddenly snap out and take bits of veneer with it! 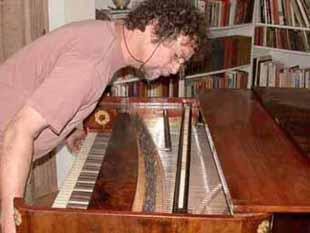 Look down into the gap and make sure all hammers are completely down in the rest position. If any hammer is standing high, push it down with a pencil or other thin stick. 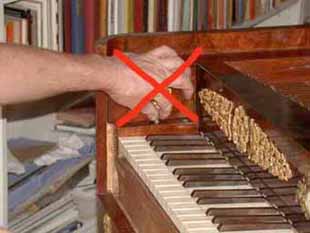 Now you are ready to slide the action out. DO NOT pull the action by the decorative brass acorns on top of the end blocks. Regardless of what you may read elsewhere, these are purely decorative holdovers from an earlier style; they are not for removing the action. If you try to pull the action holding onto these tiny ornaments, you will have no control, and chances are great that the action will suddenly descend too rapidly, causing hammers to jump upward and break on the back of the wrestplank. If the action is tight, you might also break off an acorn. Another disadvantage to using the acorns is that it is easy to accidentally push a key down during the removal, which is guaranteed to break a hammer shank. 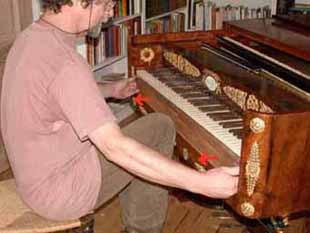 Pull the action out slowly and carefully, evenly on both sides. DO NOT push any key downward even by the slightest amount.

Note: Most pianos of this type have a backcheck rail which is sprung at the treble end, allowing the rail to be pushed downwards by the wrestplank during descent. Sometimes the rail may bind against the wrestplank, stopping the action from coming out. In this case, it often helps to begin pulling the treble side of the action out slightly ahead of the bass side. As soon as the treble begins to move freely and has descended enough for you to know the check rail spring is going to work, straighten the action out by pulling the bass side forward. If this does not cure the problem, have somebody help you by pushing the check rail down with a pencil at the treble end through the gap. 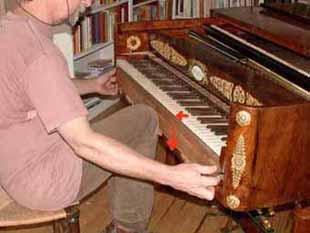 As the action slides out, the back will drop down inside the instrument. When you reach the point where the front of the action is about to drop off the front edge of the keywell, you must proceed with utmost caution; this is the most dangerous part of the removal.

Carefully slide the action forward only far enough that it begins to drop off the edge. At this point, DO NOT pull the action any farther out of the instrument. Lower it slowly, in a carefully controlled fashion, keeping it as much inside the keywell as possible until it has descended completely. Because of the angled backside of the ledge under the front of the key frame, the action will slide itself slightly forward as the front drops. 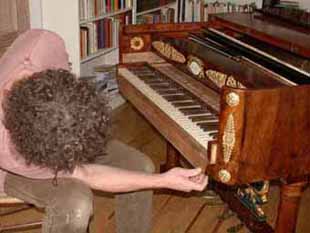 Once the action is completely down, look again to make sure no hammers are standing up. If they are, push them down through the gap with a pencil or stick. 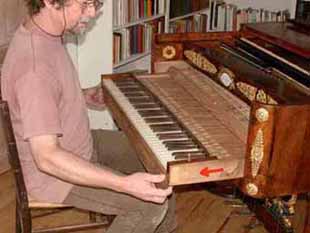 Slide the action straight out of the instrument, being careful again not to touch any key. 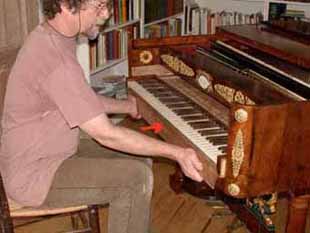 Carefully place the action in the keywell and slide it straight in. As always, be very careful not to touch any key while sliding. You may feel a moment of resistance when the action encounters the action shift spring on the treble side. Also be sure the action is not catching on the shift lever on the bass side. If it does, lift the pedal with your foot while sliding the action in. 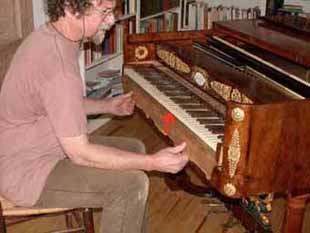 When the action is in as far as it will go, carefully lift the front edge upward while simultaneously pushing it inward. When the lower edge of the action front rail rises far enough to slide inward over the bottom, do not try to raise the action any further - you will only dent the end blocks on the sides of the keywell. Push it inward more until it stops. 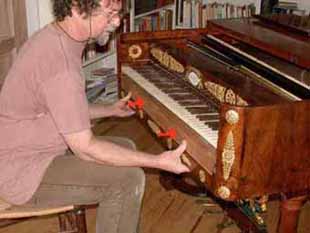 Now you must push the action inward rather strongly to cause the back of the key frame to slide up the ramps inside the keywell. These ramps are often quite steep, and you may have to push with considerable force. The action may well make a loud "bang" as it finally comes to rest in the playing position; don't worry, this is normal. Be especially careful not to touch any key while doing this.

Reinstall the front batten, check for good working of the action slide ("una corda" or "Verschiebung"), and your done!