An introduction to regulation


The type of action found in most Viennese and south German pianos from about 1790 until the middle of the 19th century has been called both "Viennese" and "German" rather indiscriminately. Some recent organologists have drawn a distinction between Stein's wooden kapsel action with no check and Walter's post-1790 action with brass kapsels and a check, calling the former "German" and the latter "Viennese". However admirable this attempt at increasing the accuracy of terminology, it is nonetheless confounded by the historical reality; both types of action where made in both south-Germany and Vienna, and both types of kapsels were used with and without checks. The only common aspect to all these actions is the basic way in which they function; the hammer, pivoting in a fork mounted upon the far end of the key, is flipped upward when its short "tail" or "beak" bumps up against a vertically stationary object. Hence the logic behind modern German terminology, which calls the whole family of actions Prellmechanik, from the German verb prellen, which means to flip upward. The most common version of this action, which has a contrivance which allows the hammer to "escape" from the driving force of the action just before hitting the string, is called Prellzungenmechanik, since "escapement" is allowed by a hinged hook or tongue (zunge)*. In order to avoid the pitfalls inherent to the issue of who built which kind of action where, I prefer to use this terminology, as it is based upon an accurate description of the functional elements.

Though often attributed to Stein, we have no idea who invented this kind of piano action. Perhaps the very word "invention" is not really applicable, because when viewed mechanically, the Prellzungenmechanik is nothing more than an adaptation of the tail hammer, a device found ubiquitously in water-powered milling and metal forming applications stretching back to antiquity.

A single keystroke of a Prellzungenmechanik can divided into three phases defined by four moments:

The amount of key travel encompassing each phase is regulated by a combination of action elements. Adjusting a Prellzungenmechanik to function well and to satisfy individual preferences requires a firm comprehension of the all of the factors involved. Click here to start the tour of one complete key stroke.

* Such a hinged hook is a standard mechanical device, found in many basic machines. Called a "pawl", it functions as a biased restraining device, catching in one direction while allowing movement in the other, as in the common ratchet and pawl. I therefore use this word in place of the various English language misnomers occasional encountered in the literature. 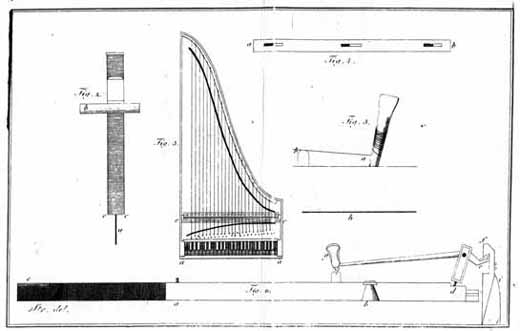 Stein's second surviving Prellzungenmechanik as illustrated in Andreas Streicher's 1802 booklet on piano playing and maintenance. This action was used in his latest instruments, and his children Nannette and Andr continued to use it until about 1805. Notice the absence of a check.