Johann Lodewyk Dulcken was the last in a family of famous Flemish harpsichord makers. After learning the craft of instrument making from his uncle in Antwerp, he moved to Munich around 1780, married a well-known pianist, and set up shop making pianos.

Externally, Dulcken's instruments resemble those of Stein, but internally and in terms of the action, they are uniquely his. His actions are similar to those of Stein, with wooden kapsels and upright pawls, but they differ in having a backcheck (which Stein never used), individually adjustable as well.

I have made 13 instruments based on the 5+ octave (FF to g3) original in the American Museum of History and Technology in Washington, D.C. Most the instruments I made were expanded in range slightly (EE-a3), without changing the internal structure or soundboard design - such minor alterations in compass are not uncommon in surviving instruments. I also altered the actions to make them more accommodating to modern players, substituting metal kapsels and a Walter-like pawl orientation. Were I to build one of these instruments today, though, I would rather do a strict copy, that is, with wooden kapsels, "Stein" pawls, and one very thin layer of leather on the hammers - perhaps none at all! The latest organological research makes it undeniable that unleathered instruments were not uncommon until about 1800, and several aspects of Dulcken's design make him a good candidate for such an approach. 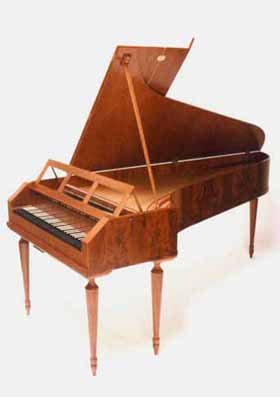 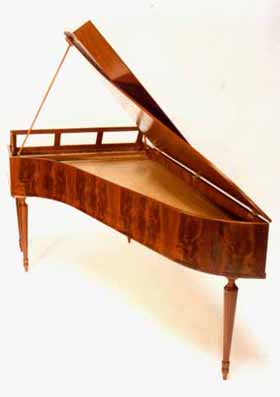