Over the years I've been involved in the construction and repair of various instruments: organs, harpsichords, harps, and guitars. The most unusual and interesting project I ever did was to make a case for a Glass Harmonica, the instrument invented by Benjamin Franklin. It consists of a set of glass bowls mounted on a turning shaft. The player touches the rims of the bowls with wet fingers, producing a sound exactly like when you rub the edge of a wine glass. 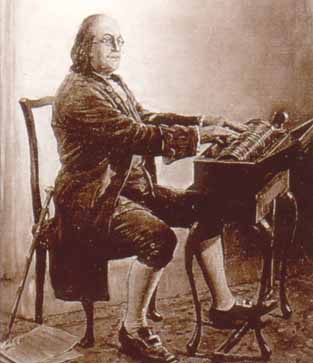 The case I made for the instrument was one of the most demanding woodworking projects I'd ever done. The central section opens like a razor-back clam shell to expose the instrument, while the two ends sections house the mechanism which causes the shaft to rotate. The ends are veneered in 12-fold bookmatch Mahagony. 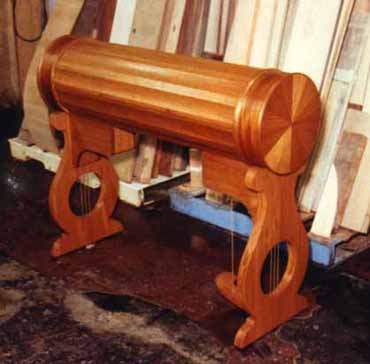 The Glass Harmonica was tremendously popular at the end of the 18th century, and its sound was thought to have super-natural powers. Players were advised against practicing too much when in melancholic moods. The hypnotist and faith healer Mesmer, a Brother of the same Masonic lodge as Mozart and Haydn, used the Harmonica as part of his "animal magnetism" treatments. Supposedly, if one played a Harmonica in a graveyard underneath a full moon, spirits of the dead would be recalled by its sound. Imitating the sound of the Harmonica was a particularly popular effect used by the best fortepianists; perhaps the most notable of the Harmonica-inspired pieces is the second movement of Beethoven's "Ghost Trio".

Eventually, the nefarious connotations of the Harmonica became to strong to be ignored, and the instrument began to be forbidden by law in the name of Public Health and Safety. It may be that the lead from the old-fashioned crystal glass from which the bowls were made could have leached out of the glass and entered the player's blood through the wet fingers, causing cumulative lead poisoning. In any event, the instrument fell into disfavor and eventual disuse.

A recent revival in Harmonica playing has been led by a number of musicians, most notably Dennis James, who recorded a number of Classical works for the instrument, notably Hasse's 1769 breathtakingly-beautiful Cantata "L'Harmonica", written for the marriage ceremonies of Archduchess Marie-Amélie of Austria with Ferdinand of Bourbon, Duke of Parma, which took place in the palace of Schönbrunn.

The sound of the Harmonica not only enchanted audiences of the past, but has also enthralled musicians today. Dennis James has even been engaged to appear on an album by the country-western star Dolly Parton.


Dennis and Dolly at the Finkenbeiner Harmonica housed in the Poletti case: 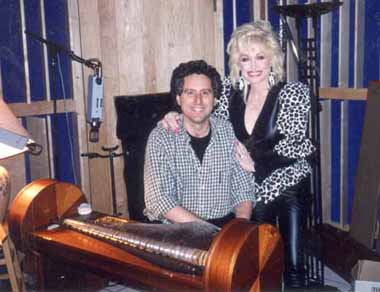