Anton Walter is perhaps the most famous of all Classical Viennese piano makers, primarily because he built Mozart's piano. He was perhaps the first maker in Vienna to start producing full-sized grand pianos. Despite his early popularity, instruments of the Walter shop seem to have gone out of favor rapidly after the turn of the century. The reasons for this are unclear; perhaps it was due to the fact that Walter seems to have lost interest in the actual building quite early on - in the 1790's - leaving the "dirty work" to his stepsons, while he spent most of his time doing horticultural experiments on his country estate. Another possibility is that he may have become "politically incorrect" due to his association with the "Jacobians" - anti-royalist Viennese sympathizers with the French revolutionaries. 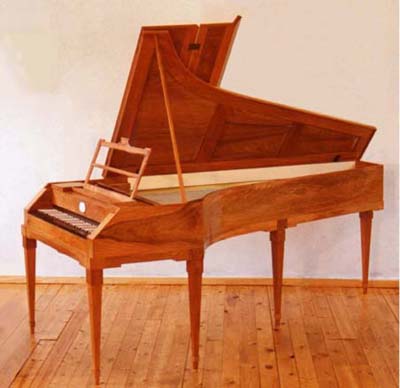 I have made several copies of the 5 octave Walter in the Germanisches National Museum in Nüremberg (MINe109), which is generally assumed to be from the end of the 1790's (the attributed date on the published drawing - 1795 - is probably a bit too early). This is the instrument which most modern builders use as a basis for their stock "Walter" model, though generous liberties are often taken in "adapting" the design.

This instrument is a typical example of Walter's "middle" period, characterized by an interior framework of a floating liner supported on columns. This structure is significantly different from the earliest surviving instruments, including Mozart's, and also from his instruments of c.1800 and later. It is a good all-around instrument for Beethoven and late Haydn, and even serves quite well for the chamber music and Lieder of Schubert. However, it's overall design and action make it a less-than-ideal choice for earlier literature, such as Mozart and C. P. E. Bach. Mozart's own Walter is completely unlike this instrument in almost every major way.